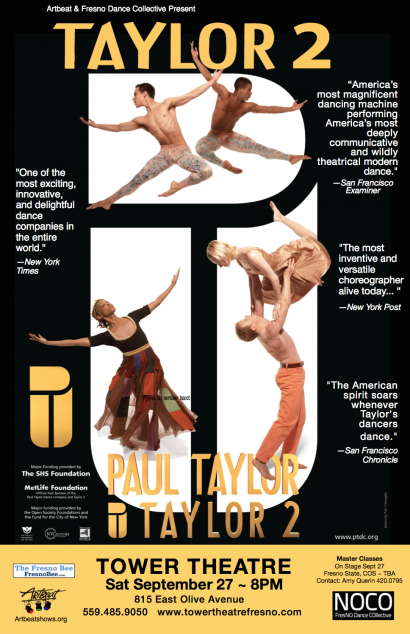 “The greatest choreographer in the world.” ~Vanity Fair

This world-renowned troupe brings the iconic style and breathtaking performance of Paul Taylor’s work to Fresno in an exclusive appearance at the Fresno’s Tower Theatre Saturday, September 27, 2014 at 8 pm at the Tower Theatre.

Paul Taylor is known as one of the pioneers of modern dance, his choreography noted for its physicality and grace as well as its cultural relevance. In selecting repertoire for Taylor 2, Mr. Taylor chooses dances that span the broad spectrum of his work. Several of the dances performed by Taylor 2 have been re-worked from the Paul Taylor Dance Company’s version to enable the smaller ensemble of dancers to perform them. Critics and audiences cheer as Taylor 2 introduces the athleticism, humor and range of emotions found in Mr. Taylor’s work.

“The Company is performing some of Paul Taylor’s finest work including some of new dances and brilliant classics. Paul’s dances are breathtaking, thought provoking and inspirational,” explained Tim Robinson, Touring Director of the Paul Taylor Dance Company. “We are thrilled to be sharing Paul Taylor’s work in Central California.”

The master class is presented to offer community dancers and dance students an instruction opportunity to experience Paul Taylor’s work. Rehearsal Director, Ruth Andrien will teach the class and brings with her personal experience dancing for the Paul Taylor Dance Company from 1974 to 1983. Andrien originated roles for Paul Taylor in such works as Esplanade, Runes, Airs, Images and Le Sacre du Printemps (The Rehearsal). She restaged Mr. Taylor’s work for professional companies and universities around the world. Andrien has been on the faculty of the University of the Arts in Philadelphia, Swarthmore College, Harvard University, MIT, The School at Jacobs Pillow, The Taylor School and the American Dance Festival, where she directed the Paul Taylor Project for the past three years. She became Rehearsal Director of Taylor 2 in 2010.

*Space is limited. Those interested in participating should contact contact Amy Querin at 420-0795 or by email at amy@nocodance.org .There is a $20 registration fee ($15 for dancers who hold tickets to the evening performance).

What the Critics Say:

“The dancing was spectacular, warm, gracious and daring. The repertoire is one to make a Taylor fan salivate: four great and very different works in one evening.”

“Paul Taylor is without question the greatest living American choreographer. Taylor’s emphasis on emotion within actual movement, the rhythmic vitality of his accents, his all-American youthfulness and optimism, all have set standards for American dance.”

“Paul Taylor Dance Company is perhaps the most beloved and respected modern dance company in the world, famous for Mr. Taylor’s wit, its sunny expansiveness, its all-American optimism and its occasional forays into darkness and gloom.”